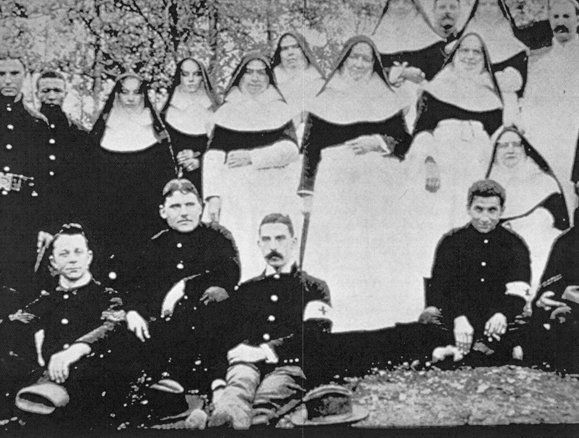 We Salute and Honor Nurses, both Military and Civilian.

For centuries, most nursing of the sick had taken place at home and had been the responsibility of families, friends, and respected community members with reputations as effective healers. During epidemics, such as cholera, typhus, and smallpox, men took on active nursing roles. For example, Stephen Girard, a wealthy French-born banker, won the hearts of citizens of his adopted city of Philadelphia for his courageous and compassionate nursing of the victims of the 1793 yellow fever epidemic.*

Within the hospital setting prior to the 19th century, nursing care could be provided by a very diverse group of people such as women from religious nursing orders (known for their quality nursing care), recovering patients or hired men and women. Without formal training in attending to the ill the quality of care varied greatly depending on the institution.

The history of professional nursing traditionally begins with Florence Nightingale (1820-1910) who believed that using scientific principles and informed education about healthy lifestyles, could dramatically improve the care of sick patients. This was evidenced in 1854 during Britain’s Crimean War. Within weeks of the nurses arrival and implementation of Nightingales’ principals death rates plummeted, and soldiers were no longer sickened by infectious diseases arising from poor sanitary conditions. By the end of the 19th century, the entire Western world shared Nightingale’s belief in the worth of educated nurses.

Today trained nurses continue to be critical in the care of and prevention of diseases, the evolution of hospitals and institutions and community outreach. Whether in a civilian or military setting, nurses will always be the light of hope, compassion, and healing that no other vocation can provide for the sick, injured, and dying.